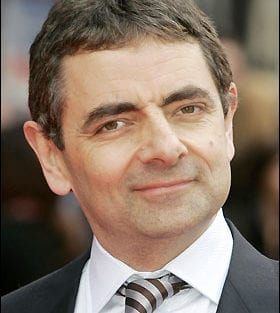 When I first saw the voice file name I wondered if it was the Rowan Atkinson.  I smiled and wondered if he would be as hilarious as in Mr Bean and any of the other of his hilariously brilliant movies.  As I was listening to him respond to the questions I could see his face in my mind’s eye and wondered if he was giving the interviewers that ‘sheepish, naughty child’ expression and wiggling his ears!  He did come up with some funny responses, but mainly I thought it interesting that he was not sure he could play the part, as the man ‘hardly moved’, a very difficult task I guess for someone who’s famous for his facial expressions.   He sounded a very down to earth, unassuming man who is almost not comfortable with the idea that he is a brilliant actor.  It would be good to see Rowan ‘having a go’ in a more ‘serious’ role!
Marlene Flannagan – transcriber.

Catherine, Fingertips Director said to her client, Stephen Armstrong, “Lucky you, interviewing Rowan Atkinson” to which Stephen replied, “He is brilliant, quite quiet and serious in interview though”, which is as one would expect.  It might be a bit freaky if he started pulling faces during interview! You can read the full interview in the Radio Times.