QWERTY: the keys to all transcription - Fingertips Typing 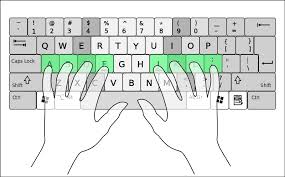 QWERTY: the keys to all transcription

If you look down from your computer screen, you will probably see that humble workhorse of every computer user, your keyboard.  But have you ever really considered why it’s laid out the way it is – after all, it’s called “QWERTY” because those are the first six letters on the top row, so the keys are certainly not arranged in alphabetical order! 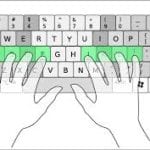 To find out whether or not the layout is entirely random, we have to delve into the history of the typewriter.

When Carlos Glidden, Samuel Soulé and Christopher Sholes created the first typewriter in 1866, they found they were faced with a major problem: the keys kept jamming.  More serious still, the faster the typing speed, the more likely it was that the keys would hit each other and jam … and, as typing competitions were a good way of publicising the new machine, this was an issue which desperately needed sorting out.

So Christopher Sholes came up with a solution.  The early prototypes had their keys arranged alphabetically; he simply moved the letters around, putting the most commonly used letters in the harder to reach places so as to slow the typists down and reduce the problem of key jamming!

Whether that story is true or mythical, we’ll probably never know for sure, but what we do know is that QWERTY was the layout used on the first commercial typewriter, the Remington Number 1, produced in the mid-1870s.  And, when touch typing became popular in the 1880s, QWERTY was the standard layout used.

It wasn’t until the early 1930s that a real alternative was designed by a professor at the University of Washington, August Dvorak.  Having studied the physiology and psychology of typing, he and his brother-in-law, William Dealey, came up with a new way of laying out the keys which was intended to be easier, faster, more ergonomic and more efficient to use than QWERTY.

On a QWERTY keyboard, the left hand does over 55% of the work and quite a few longer words, such as stewardesses and reverberates, are entirely left-handed.  Dvorak felt that typing long words with one hand was much harder – and therefore slower – so he tried to divide the typing more evenly between both hands.  The longest one-handed words on the Dvorak keyboard are only six letters long, half as long as those on a QWERTY keyboard.

So why, when you look down at your keyboard now, are you most likely to see QWERTY?

The simple answer is that Dvorak was just too late.  By the time he came up with his new keyboard, QWERTY was already the standard in offices and businesses.

To overcome this and to encourage organisations to change, Dvorak conducted studies to prove that his layout was quick to learn and to use and, by the early 1950s, he’d generated quite a bit of interest in his keyboard and its possible benefits.  So much so that, in 1956, an independent study was carried out between the two keyboards; its findings were that there was at most a marginal difference between QWERTY and Dvorak typists.  (Later experiments have also shown that layout makes very little difference to speed and accuracy provided the typist has been trained to use that keyboard.)

And so interest in changing to the Dvorak keyboard was lost and the QWERTY we’re familiar with has remained the standard layout.

Which brings us back to the beginning, both of this article and the QWERTY keyboard; if the tale about Christopher Sholes rearranging the keys to slow typists down is true, how wonderfully ironic to think that he actually came up with a layout just as fast as one created with speed in mind!

One last thought on the keyboard.  It has been suggested that Dvorak’s layout wasn’t entirely successful because he overlooked one important fact: typing is a highly complex physical and mental activity.

So if you have any complicated documents to type or format, or if you have a study, interview or forum to transcribe, come to Fingertips – our typists really do know their keyboards!