Hello from British Columbia on the west coast of Canada.  I am Jean and I work for Fingertips Typing Services.

Our Provincial Health Officer in BC is fantastic.  She is calm and sensible so we are ‘planking’ our curve.  Some provinces are not but because Provinces and Territories are so spread out there are some who have had no deaths – Nunavut, a Territory in the north, has no reported cases at all!  All schools, colleges and universities are closed and students are being home schooled with help from their educational professionals.  Although closed, long-term care homes have been particularly difficult situations to handle, so much so that the militia has been called in to try and control infections in Quebec and Ontario who are the worst affected of the Provinces. 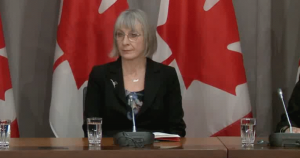 Most people are being conscientious about staying indoors.  A problem over Easter was people gathering in the sunshine and not physically distancing at all.  As a result, one tourist town near me shut all the car parks for visitors (the rest of the parking being for permit holders only) to dissuade the public from going to the beaches.  Drastic action but totally needed.

My ‘other job’ is as front of house coordinator for a theatre company and when we finished a two week run of our spring play (the other four weeks of the tour had to be cancelled when the theatres shut down) I then self isolated for two weeks.  Naturally most people are working from home (as I do) if they do not have essential jobs; all non-essential businesses are closed.  Grocery stores are organised for physical distancing and seniors have special shopping hours, mainly between 7am and 8am which does mean that we get first pick of things that sell out shortly after the stores open to the rest of the public (yes, I am a senior!).  It is sometimes difficult to explain to seniors about physical distancing – a case in point when I was shopping for groceries (the third time since 16 March) the lady in front of me was standing on her ‘spot’ and the elderly lady she was with kept dashing off, pushing past people to get other things for the shopping cart.  Shoppers were horrified but she couldn’t be controlled!

Like a lot of people I live on my own so it does get a bit lonely, but our essential workers are risking their health for us so it’s the least I can do.  We all miss our families and friends but we know it will pass in time and until then, in the words of our PHO Dr Bonny Henry, “Keep calm, be kind and be safe.”